IIKITAPIT 4 minutes
CBC Vancouver
IIKITAPIIT focuses on a new dance work and musical composition by Calgary-based Cree artist Jessica McMann that explores violence against Indigenous women, Two-Spirit/Queer identities and an examination of those intersections being a displaced adoptee affected by the 60’s Scoop. A CBC short film directed by Irina Lord with cinematography by Bryce Zimmerman.

​COFFEE 11 minutes
"Come and sit, friend. Let's have coffee together, yeah?" Coffee is a work-in-progress funded by Made in BC, Springboard Performance YYC, and The CanDance Presenters Network. Additional support from Raven Spirit Dance, West Village Theater, and Simon Fraser University. Mentored by Jin-Me Yoon and an accompanying responsive essay by Sable Sweetgrass.
Available for private showings. (no festivals)

NATOOWAPAKAA'KSIIKS 4 minutes
Fairy Tales Film Festival 2012
An animation that was created by Elijah Wells based on body movements/choreography by Jessica McMann. This short piece is part of a larger work that explores the role that two-spirit helpers have on Indigenous people struggling with their identity.  The animation gives presence to these spirit-helpers. Supported by Fairy Tales Queer Film Festivals Queer Youth project.
Solo in-person works 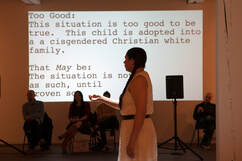 Too Good; That May Be 50 minutes
Solo
​
This work is a solo immersive soundscape performance commissioned by the Urban Shaman Gallery for the 60's Scoop exhibition in April 2017.  The work traces memory from womb-time to age 24.  The artist used government documentation pertaining to her adoption, as well as over 20 hours of interviews with family.  Jessica created ten tracks that then plays through ten different speakers during the performance.  The performance is set in the round, and audience members sit inside the sound circle.  Projections appear on the floor, with the title projected on a wall.  This work is suitable for galleries, theatres and alternative performance spaces.

Photo above is from "Too Good; That May​ Be"
Photo credit for both is Urban Shaman Gallery 2017

​Choreography and soundscapes emerged from research in Indigenous research methodologies to create a framework of Indigenous Creation methods. Working within storytelling structures, Jessica has created a new work derived from land-based research and creation in Mohkinstsis and the Ghost River, interweaved with her personal histories of adoption and displacement and connection to the land. Soundscapes, visuals, and movement create an intimate space, where we witness a personal story that draws us into a different time.

Natoowapakaa'ksiiks is a contemporary piece that was developed by Jessica McMann and Elijah Wells.  This piece shares the intimate journeys of the creators identity.  The pain of not being true to oneself, and leaning on the help of the persons two-spirits, the coming in and acceptance, and the balance found afterward share a narrative of being two-spirit. Music is composed by Adrian Alphonso (Cree), animations by Elijah Wells (Kainai) and narration by Molly Wells (Kainai).  This piece was developed with support from Fairy Tales Presentation Society, Quickdraw Animation, Jean Francois Cote.

Please contact for information on Powwow performances and Hoop Dance performances. This is available for Canada Day, National Aboriginal Day, Stampede Week, and any other major event or corporate celebration.